On Friday, May 24th, the Yap Catholic High School community celebrated its annual Baccalaureate Mass in the YCHS Loyola Chapel for the graduating seniors. The Mass was followed by a pot luck reception organized by the juniors along with their parents and guardians with contributions from all underclassmen families.

On Saturday, May 25th, the twenty members of the Class of 2019 were joined by their friends, families, and honored guests to celebrate their graduation at Yap Catholic High School’s 6th Commencement Exercises. The Salutatorian Address was given by Julia Piyon Ranganbay followed by the invocation given by Fr. Moses Tashibitit. Valedictorian Johanne Fay San Buenaventura Arao delivered the student address and encouraged her classmates to “just keep swimming” and persevering through the new challenges that lie ahead of them as they head to college.

The transition of leadership from the graduation Class of 2019 to the rising senior Class of 2020 was performed by Nicholas Untun and Bryanne Tionna Laamuut Fenenigog. The Commencement Address was given by the Honorable Henry Falan, Governor of the State of Yap. Principal Michael Wiencek then gave his final address to the Class of 2019 before the graduates officially received their diplomas.

Following the conferral of diplomas, Fr. Rich McAuliff, S.J., Director of YCHS, gave a final address to the graduates before blessing them and concluding the graduation ceremony so that the families and friends of the graduates could shower them with nunuws, marmars, leis, candy, and other gifts.

Congratulations to the following graduates of the Class of 2019: 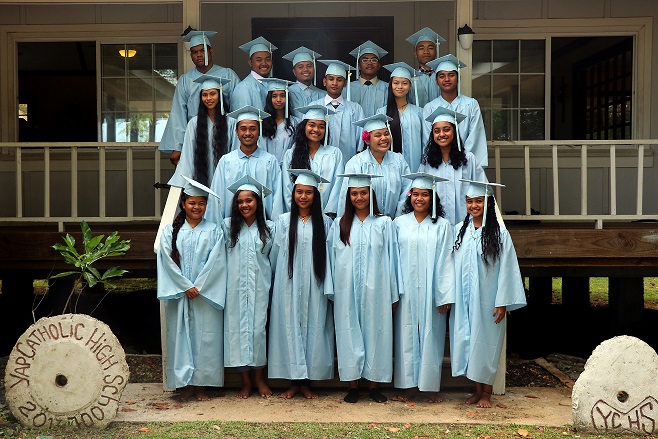