Yap Catholic High School’s Summer Session offers a program for all students to continue their academic studies throughout the month of July, while also incorporating numerous activities in the afternoons for the students to enjoy. Incoming freshmen begin their transition to life at YCHS while taking introductory Math and English courses. Sophomores focus on continuing to build their Algebra skills and explore different projects involving a novel. Juniors and seniors work on computer skills while also preparing for the SAT and working on college essays.

This year, four recent alumni returned to Yap for the summer to become the founding members of the YCHS Alumni Volunteer Corps. These four alumni are all currently enrolled at colleges in the United States and assisted with the summer session. In the mornings, they helped in the classroom as teacher aides as well as proctors for the daily silent reading period. In the afternoons, they each had specific activities that they were in charge of working with a teacher to coordinate. They also ran various ice breaker and team building activities for the students.

Bradley Kogotmay worked with the English classes as well as collaborated with YSHPO as a group of students explored their culture and worked towards creating a cultural identity video for YCHS. He is currently pursuing a degree in the field of anthropology at Portland Community College.

Domclancy “Jun” Tiliwebug assisted with the Math classes and also helped to coach the volleyball club. He is a Gates Millennium Scholar and attends the University of Portland where he is studying electrical engineering.

April Laabrug helped with the English classes and assisted in directing the drama club as they prepared their own play acting out the life of St. Ignatius Loyola. She is studying Secondary Education with a focus in English Literature at The University of Scranton.

Jamilyn “Jamie” Mooteb also worked with the Math classes and guided students in preparing science projects for the Science Fair at the College of Micronesia: Yap Campus. She attends Saint Joseph University where she is a physics major.

All four alumni did an incredible job and they were fantastic role models for the current students. YCHS looks forward to continuing the tradition of alumni returning to help with the summer session when they are visiting Yap during their summer breaks.

Pictured below are the members of the 2016 YCHS Alumni Volunteer Corps: 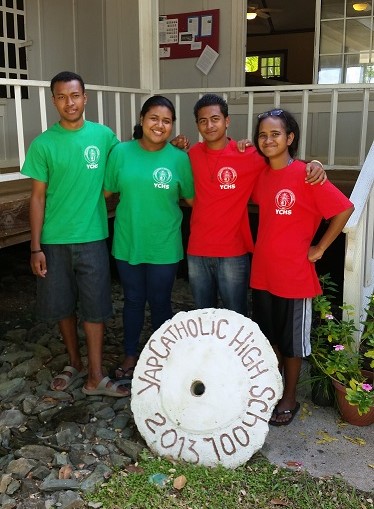